This post is about the making of my new outfit, my answer to The Manuscript Challenge. I’ve done an interpretation of the dog-handler in a boar hunting scene from “Les livres du roi Modus et de la reine Ratio”, the King Modus manuscript from ca 1370.

I admit that this outfit is well within my comfort zone and not very different from what I already have in terms of gear. But I like how it looks, it fills a gap in my wardrobe and I thought that it could be fun to interpret something exactly from a picture in my favourite medieval hunting book. In this way I can be sure that what I’m wearing are things that are meant to go together and hopefully well suitable for the activity depicted.

As you can see, this hunter is wearing a tight liripipe hood (the making of it is described in detail here) and matching hoses with fashionably pointy toes. Like many hunters on foot during this period, he is not wearing any shoes. That might lead us to suspect the hoses being soled with leather. Tiny stripes on the horn suggest that it could be carved decoratively and the thin baldric is crossed below the waist. He is also wearing a thin black belt.

The hunters blue kirtle is very well fitted and buttons down the front, probably also on the sleeves. It has a generous cut over the chest to achieve the masculine Gothic ideal, a muscular “dove-chest” contrasting the narrow waist and straight fit over the hips. The kirtle on my manuscript picture reaches to mid thigh where it ends with a softly dagged edge.

To short and to tight!

I made the pattern myself, fitting my toille in front of the mirror. Being a bit to eager to get started, I made two stupid mistakes. Firstly, I didn’t take any pictures of this step of the making. Secondly, when I had stitched the kirtle together and dagged the bottom edge, all by hand, I realised that I had cut it to short and a bit to tight to begin with. I looked stupid with my breeches (linnen underwear) showing to much and it would be hard to do any hunting with dignity in such a tight kirtle. (Admittedly, I have no ambitions of really doing any real hunting or anything requiring dignity at all. But I’d prefer if it didn’t show to much. 😉 )

I had to insert a gore in the middle back to expand the fit over the hips. The first dagged edge was sacrificed. I cut it off so that I could add an extra piece of fabric, following the lines of the pattern and lengthening the whole garment about 25 cm. When that was done, I had to re-do the dagged edge, now wider. All this was about three extra days of work, re-doing things I knew I should have done from the start. In the end I had a kirtle that was a slight bit longer than I had planned in the first place, but it looked very much like my original picture. 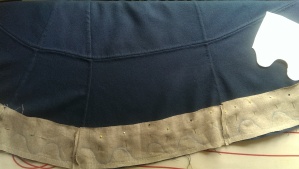 It is bitter and tedious work, mending up a mess you’ve made yourself. But once I got the length right, I celebrated my victory by turning my attention to things I actually enjoy doing: details like buttons, buttonholes and pretty edges. The thin woad blue twill was a dream to work with and I hand stitched everything with silk or waxed linnen thread. 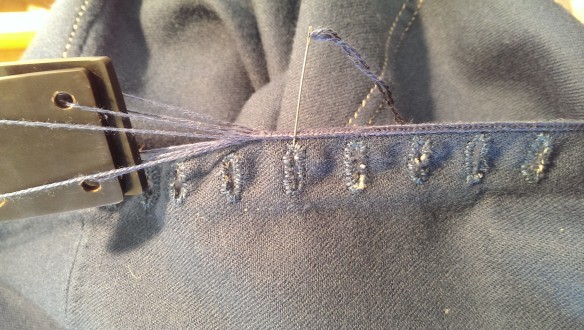 Curvy cut over the chest and a pretty tablet woven edge in silk.

A strip of linnen lining the inside and a tablet woven edge on the outside strengthens the buttonhole edges. I used silk yarn in the same woad-blue for the weft and ended up with 63 buttonholes all in all. 10 in each sleeve and 43 down the front. The buttons themselves look like little blueberries…

Slowly getting there, still a few more buttons to go…

The kirtle is deliberately cut with a light curve over the chest and has medium size “grand assiette”-sleeves with a gore inserted over the shoulder in the back. This allows for maximum freedom of movement in arms and shoulders but still gives a nice tight fit. I also added a small standing collar because I like how it looks. It doesn’t show on my manuscript-picture because of the hood, but low collars like this one are seen on other pictures in King Modus.

I finished the whole kit just in time for an event this past weekend. I’m so happy with how it turned out, but also surprised by the princely

look it gives me. The kirtle look so much more glamorous than I expected! But as I’ve worn and torn it during this weekends adventures, it starts to feel more like me.

Johan carved the horn that I carried with the rest of the outfit. I love how it is decorated with winding bands of wine leafs, happy hares and playful greyhounds. It has got a characteristic smell of tar, beeswax and gunpowder that I wouldn’t mind having as a personal signature scent.

I made a simple thin baldric for my horn but have already started to work on a larger and wider one to be more elaborately decorated, in the style of Livre de Chasse. (More on hunting horns is hopefully coming in a later post.) 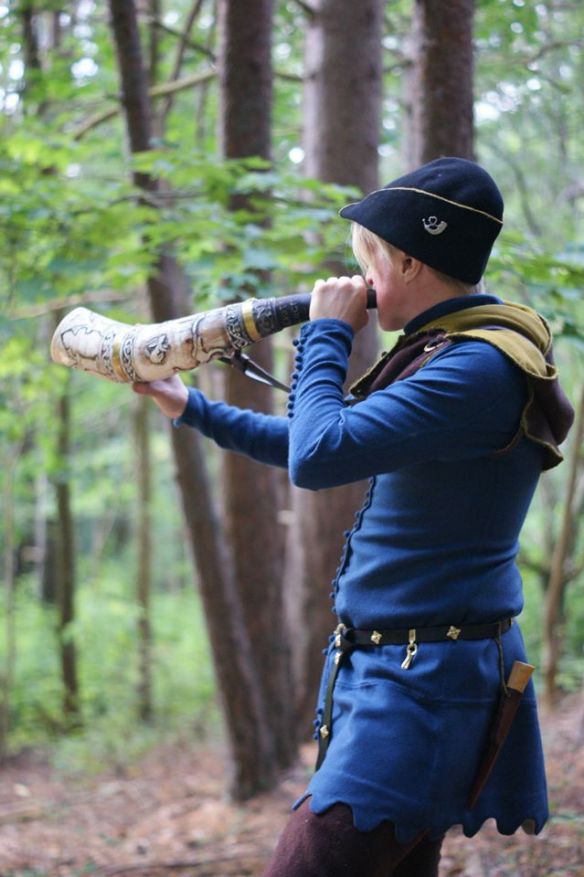 So this is it for my first manuscript challenge. It was fun and intense to make the outfit, all hand stitched and with extreme attention to every detail. Slightly challenging to correct my mistakes by enlarging the pattern for the kirtle at such a late stage and lots of extra work, but not very difficult.

I find it stimulating to work towards a tight deadline with a very clear picture of where you are going, so the manuscript challenge suits me very well. But now when I’m done with it, I think I’ll want to start over again with a new picture of a hunter in another manuscript and go for something harder for my next attempt…

Rather close, don’t you think? If you like my work, please let me know. If you like the dog or her chain-mail collar more, do tell Johan who let me pose with her, and not me. 😉

7 thoughts on “The Manuscript Challenge: A boar hunters outfit.”