Last Sunday we saw what might have been the very last day of summer this year. Sun and clear skies, but with that fresh crispy air autumn brings. A perfect day to spend outside and in a medieval setting celebrate all hunters patron saint Eustace.

The 20th of September was the old feast day for Eustace. It felt good and proper to celebrate him on the right day, just like last year. We had chosen a beautiful place for the hunters to meet, as it is described in the hunt books.

Cloth was laid out in the grass. Everyone brought a little something to eat and share with the others. Some ate standing, some sitting and some laying on the ground, leaning on their elbows. The four dogs present mostly ate running, with a mischievous look about them and their prey of stolen food clasped between their jaws. 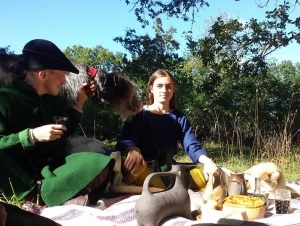 Johan claims that this must have been a problem experienced by the hunters back in the 14th century and that we therefore must not omit to reenact the ordeal of having food stealing dogs around. I’m sure his wolfhound Boudica agrees heartily, satisfied with her catch of my very expensive piece of Gruyère cheese.

Johan had made his first attempt on a classic medieval “standing crust” pie, filled with liver of deer as a traditional hunters “umble pie” or “humble pie”. The story behind the name and how humble pie is connected to hunters need a post of it’s own. I hope Johan will also share his experience of making and tasting it, as well as the recipe.

The umble pie and the cheese.

Boiling sausages in beer before grilling them.

Even with the loss of my chunk of cheese (which I ought to have guarded better) I needn’t starve. The hunters had brought plenty of food and shared generously. We had sausages boiled in beer and then grilled over open fire, sweet pastry’s spiced with cinnamon and several different types of pie.

In the afternoon when all the hunters were properly gathered and fed, we went on to our playful competition in more or less hunting related games. We began with explaining the purpose of the actual gathering of the hunters as it is described in the huntbooks.

The hunters gather up to plan the hunt in detail, it is basicly like a early brunch meeting before the actual hunt. Some hunters who have been tracking interesting prey in the nearby woods now return and report their findings to the master of the hunt. They were expected to gather “fumes” along with a stick broken in such a way that it could be used as measure of an individual animals track.

New readers of our blog might not know what “fumes” are and neither did some of the participants of our hunting feast. Fumes are animal dung. The hunters gather fumes in their hunting horns, carefully stuffed with grass so that the fumes won’t fall out.

The fumes must be presented to the master of the hunt. He will then analyse their quality, shape and texture along with the size of the matching footprint before making a decision on which prey the hunting party should go for.

To us this might sound strange, but the judging of the fumes was a crucial part of the preparations before a hunt. Now when you know this and look at the pictures below you’ll see what most overlook . On all of them there is a man showing a handful of little brown balls to the huntsmaster, the most important part of the picture. (Click on the them to enlarge) 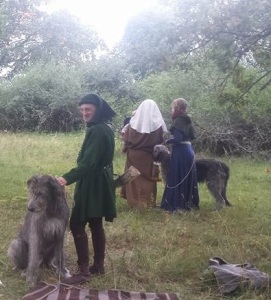 We sent our hunters out divided in two teams to search for fumes. It didn’t take very long before they came back to present them to Johan and me as masters of the hunt. Both teams demonstrated true commitment to the cause and the spirit of the competition. But I must admit that I was surprised by the diversity and amount of strangely shaped shit brought back to us!

The first team presented a pile of something that looked like horse dung, claiming that it was from a very big deer or possibly some kind of unicorn. But unicorns only poop rainbows and medieval Christians didn’t eat horse (and definitely should not hunt them). Therefore the other team presenting fumes from what might have been a fox was deemed winner.

So much for the reenactment, the rest of our games was mostly for fun. We had a quiz with tricky questions about the medieval hunt, a horn blowing competition and my favourite – a philosophical feud on which hunt that’d be the nobler one – the one with dogs or the one with birds of prey. Find out the correct answer in this post: Flea pickers and dogturds!

For grand finale we had the two leading participants Karin and Sannah choose one of the dogs and compete against each other in a search for a hidden sausage. (It must count as some kind of hunt, don’t you think?) Bets were placed on the dogs and then the competitors were off. 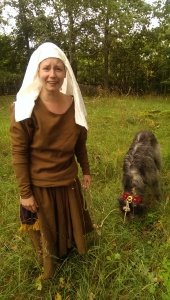 Sannah – the proud winner of this years hunting games

The race was over in seconds and far from even. I’m proud to say that it was my Basilard that led Sannah the final steps towards to her glorious victory in this years hunting games. Her price will be delivered as soon as it is ready, a custom made T-shirt with our blogs’ logo on it.

After the games we returned to our feast to have some more pie, wine and cheese. In an attempt to make our merry picnic relate to our patron saint, I asked Johan to tell the story of saint Eustace. I would have done it myself if I’d only remembered it, but that is exactly why you have feasts in remembrance of saints – to refresh ones memory of their martyrdom. 😉

For next year, I think it could be fun to do some sort of simple play to act out the story of the saint. It is a nice medieval tradition and I’m sure that’d make it easier to remember. 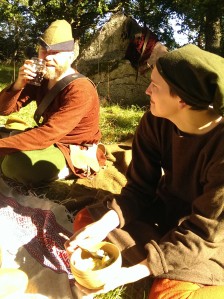 This was our second feast of St Eustace and even if the event was not as big as last year, those who came had a good time.

We must have done something right because I’ve heard that some of our friends in St Huberts Rangers housed their own celebration in rural central New York, inspired by us. Inspiring is the best we can hope to be and I already have plans for next years celebration.

(See more pictures in our Facebook album from the event!)

We hereby invite you all, hunters, nobles, lords and ladies, dog-keepers and local farmers to gather and make remembrance of St: Eustace’s martyrium. In honour of St: Eustace, the patron Saint of hunters, we celebrate his feast day on the 20th of September with a 14th century picnic in the woods outside Uppsala.

The gathering of hunters.

Here according to Edward of Norwich’s The Master of Game:

The gathering of the hunters

And the place where the gathering shall be made should be in a fair mead well green, where fair trees grow all about, the one far from the other, and a clear well or beside some running brook. […]

And also they that come from home should bring thither all that they need, every one in his office, well and plenteously, and should lay board clothes all about upon the green grass, and set divers meats upon a great platters after the lord’s power.

And some should eat sitting, and some standing, and some leaning upon their elbows, some should drink, some laugh, some jangle, some joke and some play — in short do all manner of disports of gladness […]

This event is a reenactment of the gathering of the huntsmen before going out on a great hunt. It means that it is a social event and no hunting will be done. However it is a most suitable opportunity to eat and drink together or perhaps engage in playful games on a medieval style picknick. More info about activities during the event will be added later on as participants confirm their partaking.

The celebration of St:Eustace will take place in a beautiful groove of old oaks in Hågadalen wildlife reserve just outside Uppsala (Sweden) on the 20th of September, 15:00.

To partake you will need an outfit probable for late 14th century (1350 – 1420). Our definition of “probable” is not necessarily an entirely hand-made outfit, but of period cut, materials and colours. Modern personal items such as glasses are not allowed, we ask you to wear period equipment instead. Modern haircuts, visible piercings or tattoos must be hidden. Bring your own food and drinks. If you have any questions or are uncertain about the appropriateness of your kit, please feel free to contact us on our Facebook- page and send us a picture.

Confirm your application on the event-page on Facebook. We are looking forward to seeing you in September, very welcome!