The sound of the horns and the barking of the dogs, the excitement of that experience, is often described as the most joyful thing in hunting.

Communication with the other hunters is most important use of the hunters horn. In the medieval huntbooks different signals are described that should be sounded in different phases of the hunt. You blow a certain signal when you are going out on a hunt and another when you are riding back home. There is a signal for when the game is sighted or the hounds are to be released or to call them back and finally after a kill you blow the “mort”.

What not everybody knows is that the horn also plays an important role before the hunt, used in a way that may seem strange to us today. The huntbooks describe how some hunters are sent out in advance to track up animals and suggest appropriate game. 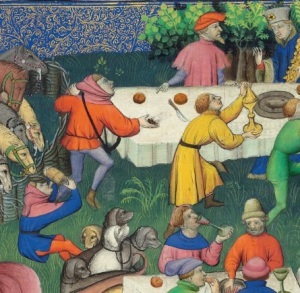 They return to the merry gathering of the hunters and report their findings to the Master of the Hunt, informing him about where the animals are, what their tracks look like and bring back fumes for him to judge them by.

When found, the fumes are stuffed into the hunters horn and he seals it with some grass to keep the fumes from falling out.

Here the hunters are seen pouring “fumes” out of their hunting horns. Judging by the shape, size and quality of the fumes from different animals, the master of Hunt decides for the most appropriate game.

Hunter pouring fumes out of his horn.

Edward of Norwich teaches us in his book Master of Hunt from early 15th century, how a to know a Great Hart by the Fumes:

“I shall teach you to know a great hart by the fumes of the hart, for sometimes they crotey in wreaths, sometimes flat and sometimes formed. Sometimes sharp at both ends and sometimes pressed together.

If he find the fumes that are formed and not holding together as it is from the beginning of July into the end of August, if they are great and black and long and are not sharp at the ends, and are heavy and dry without slime, it is a token that it is a hart chaceable.

If the fumes are faint and light and full of slime, or sharp at both ends, or at one end, these are the tokens that he is no deer chaceable. If they be slimy it is a token that he has suffered some disease.”

Edward elaborates quite a bit on the subject of fumes so I took the liberty of shortening his advice slightly. Read more about our hunting horns and how Edward of Norwich thinks they should be made here. Johan is as always one step ahead and provides an informative video about the use of the hunters horn.