After all this time it seems that we need to talk about the actual hunt.

There where many ways to hunt during the medieval times… just like there is now. The one that mostly concerned the huntbooks and its intended audience was the hunt Par force, but other types of hunting was popular and prevalent. We will have cursory look at them.

Many ways of hunting

There where many ways of hunting in the medieval times. The one we most Think about, where a hunter stalks his prey with his trusty dog companion, was called the bercletti. Our sources don’t talk much about this hunt but mentions some breeds that are good for this kind of hunt and that it is preferable to wear green clothes and even paint your bow green.

Phoebus recommended that bows be made of boxwood or yew and twenty hands long (over three feet). They were to be strung with silk, which was more elastic than hemp. Arrows were to be eight hands long, and the double-edged and barbed head five fingers long and four wide. A hunter stalking for game was always to have his bow ready and partly drawn in order to avoid a quick motion. The arrow was to pierce the animal’s breast. 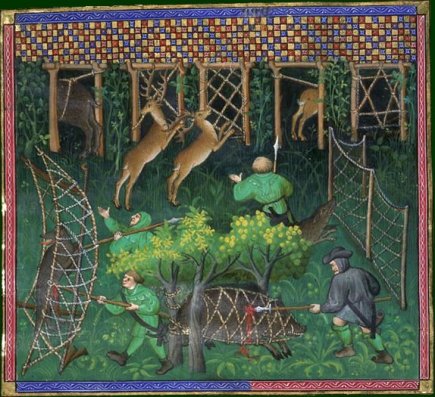 Netting and trapping was of course also popular, especially amongst bisshunters (those that hunter for fur). It was considered a lowly form of hunting. Edward of york will have nothing to do with it and does not mention it in his book (or, rather he mentions that he will talk about it and then skips it altogether). In King modus there is some trapping as well as in Livre de chasse. trapping and netting was something that was also considered a method for poachers. In Modus these are treated a bit ambiguously. They are of course not to be tolerated, but are even so thought of as fellow hunters of skill. It seems the romantic shimmer have Always illuminated the poacher amongst his fellow hunters. 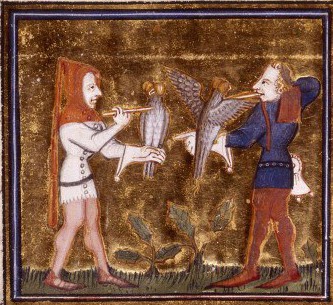 The hunting of prey with Falcons and other birds of prey was of course a loved way of hunting. There seems to be a little animosity between ‘doghunters’ and ‘birdhunters’, (as can be read about here —>  )but many did both. The art of birdhunting is a subject for a later article (one I will need help writing), so for now, lets stay with that it was an appreciated form of hunting.

the great hunt, hunt par force. This is what takes up most of the huntbooks. This is also the hunt we will look a bit closer upon.

The stages of the hunt par force

It all starts the day Before the hunt. The huntsmaster goes out and talk to the foresters and woodsmen. Talking to them about what kind of prey is available and where it has its overnight lay. After the lay has been located the hunter marks the trails in and out of the bushes (the lay is usually in thickets). When the markings are out the hunter returns home for the night. 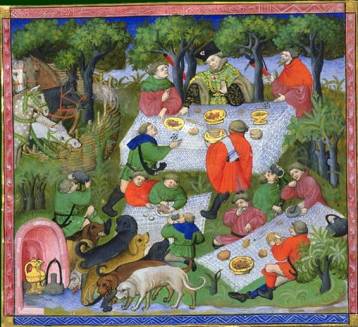 The day of the actual hunt the whole huntingparty sets out. This is usually a big affair with noblemen hunting, different kind of dogkeepers, stableboys and different kind of specialists. Most of the hunters assembled in a sort of huntingbrunch called ‘the gathering’ (something we reenact each year on st. Eustace day). Whilst they were assembled at the gathering the hunter set out to the lay he had marked the day before.

At the lay he does two things.
He cuts a small stick the size of the hoofprints at the site.
He also collects ‘fumes’ (that is a more fancy word for poop, my friends), that he puts in his horn and secures with some grass.

After this he returns to the gathering. 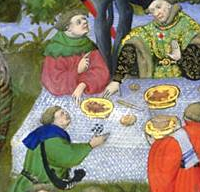 There all the hunters that has been out to different lays shows their fumes and sticks to the huntsmaster who then evaluates the fumes and the sticks, thereby judging the animal’s size and how much ‘in fat’ it is. If we look more carefully at the picture above, From Gaston Phoebus ‘livre de chasse’ we can see how the fumes are being inspected at the high table by Gaston himself.

He then proceeds to decide which of the animals they are going to hunt that day.

This is the only animal that they are hunting. They can not change prey during the hunt.

When the animal is chosen the hunters move out to their places and prepare for the hunt par force. Three relays of three greyhounds each it positioned along a route. Raches, packhounds, are readied to be released. At least 12, preferably 24 or more is the recommended size of the pack. “The more hounds, the merrier music they make” , Edward of Norwich states. 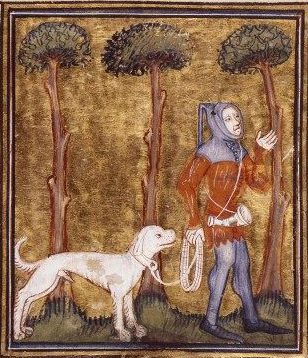 A special trackingdog, the lymer, is brought forward. This dog is used to find and move the prey.  It was called a “lymer” (or limer) because it was always kept on a line (lyme).  As soon as the game is moved, the signal for ‘the game is afoot” is sounded and the raches is let loose after it.
It is recommended that the Lymer is brought along behind the raches to easier find the game if it is lost.

The raches are to chase the game and the hunters to follow on horseback, not wholly dissimilar to an English foxhunt. Bows are not used, but sometimes swords and javelins. It seems that the main use for these where to wound the animal to slow it, making it loose stamina and also make the trail it leaves clearer to the dogs.

If the game was lost the hunt stopped and the lymer brought up to find and move it again, and the hunt continued. If the game startled another animal, the dogs where not supposed to take this, but stay true on the decided animal. 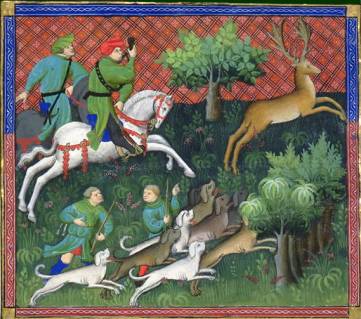 Huntinghorns were used to communicate during the hunt so all concerned would be able to keep up as to what was happening.  ”the game is afoot”, ”the dogs follow the game straight” (parfait), ”the dogs have lost the game” where some of the signals used during the hunt. Most hunters, doghandlers (Berners, or valet de chiens) and other had horns and were supposed to repeat all signals. Thereby both showing they had heard it, and also signalling along to others further up.

As the hunt drew past a relay of greyhounds (greyhounds was a collective term for all sighthounds) they were let loose, or ”slipped” on the game. It the greyhounds where always slipped AFTER the prey had past, never before. Greyhounds run fast (around 65 Km/h for a good one) but not very far. They are sprinters. If one relay did not catch the prey the next one it passed was released.

The end of the hunt

At some point (well… at the end actually) one of the greyhounds would pull the game down. They where not supposed to kill it though and the dogs were pulled of, or beaten with sticks so they left the animal alone, and a hunter killed it with a sword or dagger, and in some cases a spear. The Mort was then sounded on the horn (unless it was a female animal for whom the mort was not sounded) to denote that the prey had been killed.

After this the animal was skinned and disemboweled. The dogs got their fair share of the animal and everyone went home to share huntingstories.Another rather complicated note was played on the horns on the hunters return.

other speciality hunt was also practised, for example Otterhunting 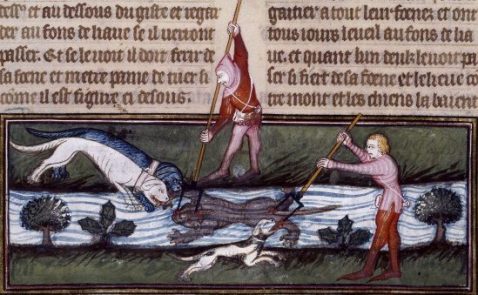 And coursing, mostly for hare and rabbit 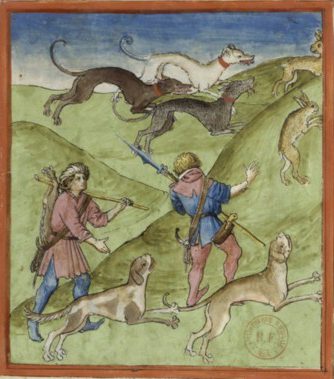 This has been a very short summary of some the medieval hunting. For some more reading of certain aspects of it you can read about the different types of dogs here

More about the hunt books, and who wrote them here

Something about javelins in hunting, with a little film; here

More about women in hunting, here

So, Finally we covered at least the basics of the medieval hunting… 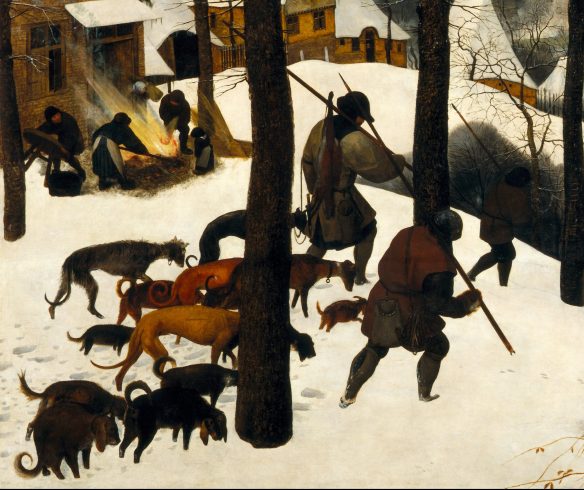